In which the bishop does not write about clouds.
June 15, 2018 Audrey Scanlan 3 Comments Bishop's Blog 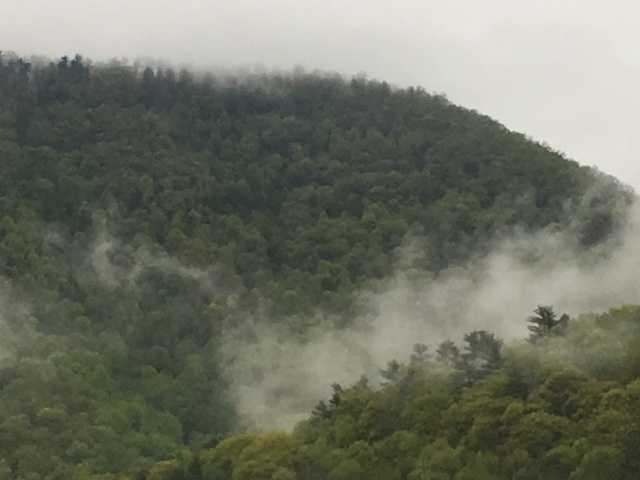 Scene:  8:04 Friday morning. Bishop is sitting in leather armchair, sipping coffee and enjoying a light breeze coming through the opened sunporch door, is thumbing through poetry volumes, and reading Edna St. Vincent Millay and Percy Bysshe Shelly on the subject of clouds.  She muses about a nascent blog entry based on Exodus 13:45 and some recent photographs that she has taken.

Scene: 8:10, Friday morning.  Bishop’s husband walks through the room towards the coffee pot and wonders out loud when the Bishop is going to say something about the children separated from their parents at the border, and the recent statement by the Attorney General who cited St. Paul on the matter.

On Thursday, Attorney Jeff Sessions cited Holy Scripture, from St Paul’s Epistle to the Romans, Chapter 13, calling for obedience to the law as a compelling reason for us to continue the practice of separating children from their parents at our country’s border.  Sessions said, “’I would cite you to the Apostle Paul and his clear and wise command in Romans 13, to obey the laws of the government because God has ordained them for the purpose of order,’ he said. ‘Orderly and lawful processes are good in themselves and protect the weak and lawful.’”

Sessions’ justification for the separation of children from their parents is based on the concept that it is the parents who have broken the law, and not their children.  Hence, the parents are subject to being detained, and are separated from the children with whom they are traveling. This “zero tolerance policy” has resulted in more than 650 children removed from the care of their parents in a two-week period last month.  (http://time.com/5312987/jeff-sessions-separating-immigrant-families/)

According the New York Times, children removed from their families are taken to shelters run by non-governmental organizations. There, workers attempt to locate a relative or guardian in the United States who can take over the child’s care. If these attempts fail, the children remain in custody. It is reported that finding parents or relatives is an arduous task because children generally arrive without any documentation.https://www.nytimes.com/2018/04/20/us/immigrant-children-separation-ice.html

While our awareness of this practice has been heightened in recent days, the New York Times reports more than 700 children have been separated since October, including more than 100 children under the age of 4.  The data was prepared by the Office of Refugee Resettlement, a division of the Department of Health and Human Services that takes custody of children who have been removed from migrant parents.  https://www.nytimes.com/2018/04/20/us/immigrant-children-separation-ice.html

On Wednesday, a cardinal in the Roman Catholic Church said that separating mothers from their babies was “immoral.” Cardinal Daniel DiNardo, the president of the US Conference of Catholic Bishops, said, “Families are the foundational element of our society and they must be able to stay together. While protecting our borders is important, we can and must do better as a government, and as a society, to find other ways to ensure that safety. Separating babies from their mothers is not the answer and immoral.”  https://www.cnn.com/2018/06/13/politics/immigration-illegal-family-separation-catholic-bishops-asylum/index.html

This comment of the Cardinal’s was incendiary, and prompted Sessions to  unleash his exegesis on Romans 13.

It is not helpful to use Holy Scripture as a weapon.  The practice of “proof texting” is dangerous and unfair, and discredits the tome of Holy Writ that we consider to be sacred and inspired by God.  If you really wanted, you could find a scripture verse to hold up for almost any cause.  Those who argue against women in leadership, against homosexuality, in favor of “traditional” marriage practices and industrial practices that degrade the environment, have found lines and phrases in Holy Scripture to support their views.

As a religious professional trained at Yale University and Berkeley Divinity School, I was taught in the practice of Historical Criticism.  The purpose of the Historical Critical method of Biblical Criticism and Interpretation is to investigate what actually happened in the events described or alluded to in Scripture. The goals of this method are to present a body of facts that show what actually happened and why, and illuminate the past, creating a comprehensive picture of a culture’s own record of history; understand the significance of events and interpret them; and understand motives as well as actions.   When the Bible is read in this way, it pays homage to the culture and setting in which the work was created and gives us an understanding of the context.  To apply that context to our own time in small bits is not appropriate, and to use pieces of the text to justify contemporary actions is dangerous.

I look to the Bible through a historical lens, but also, with a wide-view, lifting up the broad brushstrokes  and themes of justice, love, mercy, steadfastness, and God’s covenantal relationship with us, God’s beloved children.  Jesus’ three-year ministry focused on love, inclusion, breaking down barriers, and compassion, and his kenotic end is a model of self-giving.

St. Paul’s letter to the Romans is one of his most mature and comprehensive theological works; it is believed to be his last letter, dating from around 58 CE.  In the letter, Paul  works to harmonize the conflicting tensions between Gentile Chrisitians and Jewish Christians of the age.  He strives to express the accessibility of the Gospel for all humanity, justification by faith, the role of the people Israel in God’s plan, and God’s view of righteousness.

Chapter 13 treats the topic of being subject to authorities. Paul urges submission to civil authorities.  In Paul’s time it was believed that governmental authorities were supported by the “powers of angels” (Cullmann) and that the work of the nation was influenced by a higher source.  Thus, “In counseling obedience to the Imperial Government, Paul may be held to imply obedience to the spiritual powers behind it, but- and this is the vital point- such obedience can be given by Christians to these authorities, of whatever kind they may be, only in so far as their commands are consistent with the rule of Christ… The sum-total of Christian Ethics is to ‘love one another.’ There is no duty that is not included in “love,” and ‘nobody’ that is not consistent with ‘one another.’” (T.W. Manson)

At the End of the Day:

Proof texting is not helpful.

Separating children from their parents is abusive, cruel and inhumane.

There has to be a better way:  a way that is not driven by fear, control and the need for dominance, but a Way- God’s way- that grows from love, and peace and compassion.

Here’s a word from the Episcopal Church on the topic

3 thoughts on “In which the bishop does not write about clouds.”