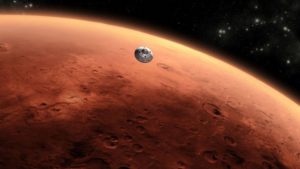 In the aftermath of the Thanksgiving holiday with turkey played in its many variations- sandwiches, casseroles, and soup…  amid the onslaught of the great season of capitalism that has been conveniently packaged for us, now, into Black Friday, Shop Local Saturday, Cyber Monday and Giving Tuesday… and in the race to wind the string of lights around the lamppost, mailbox, and front porch columns so as not to be the only dark house left in the neighborhood…

… amid all of this holiday flutter, you may have missed it:

We landed on Mars.

Oh, it’s not the first time- that was in 1965-  the touchdown on Monday was the eighth time that we have made the 301,223,981 mile-trip to explore our celestial neighbor.  The purpose of this most recent mission is, reportedly, to deepen our understanding of what makes Mars “tick.”  In a two-year study program, the interior of the planet will be investigated.  The process will begin with taking “measurements of Mars’ vital signs, like its pulse, temperature and reflexes — which translates to internal activity like seismology and the planet’s wobble as the sun and its moons tug on Mars. (Scientists will) investigate what causes the seismic waves on Mars (and will use) the Heat Flow and Physical Properties Package (Instrument) to burrow beneath the surface and determine heat flowing out of the planet and the Rotation and Interior Structure Experiment will use radios to study the planet’s core.”

After the robotic arm of the spacecraft unpacks the instruments onto Mars’ surface- which will take a full eight weeks-  the study will begin.  The “neighborhood” of Mars that NASA has chosen for this experiment is named “Elysium Planitia.”

At our Diocesan Convention in October, I suggested that, as a diocese, we are on the threshold of something new.  I invited us to consider four words that I believe will be important to us as we seek to become “right-shaped” for mission in the place where God has planted us.  The first of those words is “Discovery.”

In my address to Convention I said:

There are some key words that I have identified for our future together-  you heard them at the end of my sermon at our Convention Eucharist earlier today:

These are real words- not something I found on the back of a glossy book jacket- they are real words, springing from my heart- and I believe that they are vital for the next chapter of our lives in Christ as the Diocese of Central Pennsylvania.

Here’s the long view:  My vision is for us to be a diocese- The Body of Christ-  working for and worshipping God, in a way that is vibrant and right-shaped for us.

working for and worshipping God,

in a way that is

What does that mean?

I like the image of our Mars voyage, especially this current one, as we prepare to literally dig a little deeper into this wonderful and mysterious planet to learn more about how it works.

Our discovery of Mars began in 1965 with the pioneering Mariner 4 spacecraft which didn’t actually land on the planet, but took the first detailed photographs of the Martian surface.   In the late 1960s and early 1970s, Russian and American efforts launched as many as seven additional missions, each attempting a successful landing on the planet with instruments intact, but the missions failed in one way or another, and allowed only partial transmission of data back to Earth.  In 1976 , the US made the first fully successful soft landing on the planet’s surface, returning the first color pictures and extensive scientific information about the topography of the planet.

And so, the pattern of discovery has included multiple efforts, focusing first, on how to arrive safely getting the “lay of the land,” and, as the missions have continued, to delve deeper and deeper into the composition of the planet, seeking to understand how it works.

In this season of our diocesan life together, we are invited to do some of our own exploration and discovery.  What makes our parish “tick?”  What are the layers of its composition?  What is the neighborhood in which it is planted?  Who is there? Serving God’s mission invites us to tend to our neighbors with compassion, generosity and love.  What might you discover within walking distance of your parish that you haven’t seen before?

In the season of Advent, we are invited to dig a little deeper and explore the landscape of our souls.  Discover the movement of the Holy Spirit within you, give voice to the yearnings in your heart, and prepare a place for the coming of Christ.  “Preparing a place” is a wonderful metaphor of hospitality, but at this time of year, I like to think of the preparation as a discovery mission, an interior exploration of our hearts so that when we receive the gift of Jesus, we know the depth of our need for his healing power and grace in our own lives.  Yeah, Advent is no longer thought of as a “penitential season,” but we can do good and deep soul work, launching our own spiritual mission of discovery, making ready for the coming of Christ.

Discovery.  How do you see it as an Advent practice?

Next week, we’ll think about how Experimentation fits into the work of preparation-  in Advent, in this season of diocesan life, and in the path that we make, together, walking in faith.