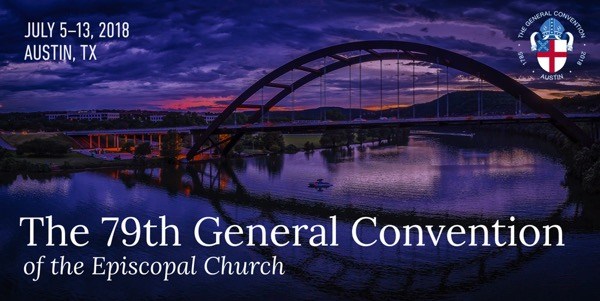 After two weeks at the General Convention of the Episcopal Church in Austin, Texas during  which we spent hours in committees considering, hearing testimony about, perfecting and preparing more than 400 resolutions for review and action taken by the two legislative houses of the Episcopal Church (the House of Deputies and the House of Bishops)… I find myself wondering about all of this “work.”

Work is best defined by an equation. Here’s one common version…

I spend an hour in the kitchen with some apples, flour, butter, sugar. I apply a knife and rolling pin. I put my product in the oven.  I get a pie.

I dig in the flowerbed in my backyard.  I pull weeds.  I dump them in the compost pile. I use a spade to make small holes and insert flower plants purchased at the nursery.  I apply water.  I have a garden.

Work- according to the definition we learned in physics class, is about force (energy) and what it does- what happens- (displacement) when it is applied to an object.

The work that we did at General Convention did involve energy… and the displacement of the object was effected (the resolutions passed or did not pass legislation) but the full outcome of that work still needs to be seen.  The work is not done.  The pie has not yet been eaten, the flowers have not yet fully bloomed.

We passed some legislation that will take effect immediately and that will be folded into the life of our collective community through its legalistic arm of the canons.  Some of the canonical changes that we made were to remove the statute of limitations on reporting sexual misconduct and abuse through the Title IV disciplinary canons.  We voted to include environmental ethics and theology in the competencies for Christian Ethics for those in the ordination process, and we defined clear timelines and the assurance of appropriate pastoral care for bishops and all affected parties when handling a pastoral relationship issue between a bishop and her/his diocese.  These are but three of the dozens of small canonical changes that we voted to approve at Convention.  Work. Force. Displacement.  Effect.

All of this, of course, was done in the context of a grand Episcopal two-week family reunion/vendor trade show in which tacos were eaten, jewelry and icons from the Holy Land were purchased, seminary classmate friendships were rekindled, and programs from around the Church were promoted.  Our deputation took up a mission of creating food and toiletry bags to hand out to the homeless on the streets.  Cowboy boots and cowgirl hats were purchased, and the million bats that live under the Congress St. bridge in Austin were observed, coming out in their winged, erratic flight pattern displayed at dusk.

All of this was steeped in, wrapped in, punctuated by… Prayer. Worship. The Sacraments.

And that’s where the work got real. Real for us as Christians.

We worshiped daily, as a community in a room big enough to seat thousands. We worshiped in several languages, with different kinds of music, and with different preaching styles. Some of the worship was exhilarating (we had a revival, y’all!) and on the day when I almost skipped worship because I was really stressed out and overwrought, I was given the gift of a worship service full of silence and Taize chant and a monk delivering the message. (God is good.)  We had the opportunity for healing prayers at the revival service and the station that I went to was for prayers in Spanish.  The cadence of the minister laying hands on my shoulders and praying in the sonorous language of Espanol was its own healing balm.  ++Michael Curry preached a Good Word at several of our gatherings and, in his inimitable style, he was engaging, thought provoking, full of spirit and inspirational.  His message- The Way of Love-  was/is simple-  and so beautifully crafted that one could not leave without love and hope in one’s heart.

Some folks gathered for the Daily Office in the morning.  Needing quiet to spiritually prepare me for the day, I finished my time at the gym with a 20 minute “sit” each morning in my hotel room, looking out over the city of Austin, sipping coffee and letting the Spirit seep in and around my thoughts, cares, anxieties and excitement for the day ahead.  It was soul-soothing.

All of the work that we did began and ended in prayer.

Alfred Lord Tennyson said “More things are wrought by prayer than this world dreams of.” Indeed.

And St. Benedict taught that balance is best, that prayer and labor are holy companions. Ora et labora.

I know that I’ll be processing the work that we did at Convention for some time.  I know that much of it was made possible by the prayerful foundation from which it sprung and that the success of it- its unfolding- will depend on our measure of faithfulness and spirit-led implementation.  May it be so.  Come, Holy Spirit. See what we can do, together.