One of the books in the reference section of my home library sits with a broken spine and a bulge in the center of the book from something that’s been stuck in-between the pages and left for sometime.
I use this book infrequently, as its title may suggest:
The book is The Book of Occasional Services and the lump in my copy is a piece of chalk, stuck in the leaves at page 47.
The service that I’ve been following in this book since the early ‘90s is the “Blessing in Homes at Epiphany” and the chalk, in our house, is an integral part of the rite as we perform it.
At our house, we’ve combined the Episcopal rite of the Epiphany house blessing with the ritual of Chalking the Door in which the horizontal frame above the door is inscribed with the letters C+ M+ B with  the date of the year surrounding the letters. This year it will look like this:  20 C+ M+ B 17.   The letters C, M, and B come from the traditional (9th century) names for the three kings, or Magi: Caspar, Melchior, and Balthazar. Another idea is that the letters also signify Christus Mansionem Benedicat, which means “May Christ bless this dwelling.”
Years ago, when we first started this, I gathered our children around me on the day of Epiphany (that’s today, by the way, January 6)  and had them read, as best they could, the Collects and the Magnificat (the assigned canticle for this rite.)  And then they grew… and became less interested in wading through a bunch of prayers before getting to the good part of defiling the house with chalk. (This, from a mother who refused to let them crayon on the walls or put stickers on the wallpaper!)
There were a few years when we breezed through the Lord’s Prayer and got to the fun stuff.
And then there was the year when I stood alone on a dreary January afternoon and chalked it on my own, praying not just a blessing on the house but on all those who lived within who, at the moment, were scattered and chasing their own Epiphany dreams.
Any ritual that brings our faith traditions alive in the home is special to me.
I remember the twinge of jealousy that I felt when our youngest returned on Saturday morning after a Friday night sleepover- she came through the door murmuring the Shabbat blessing that they had said the night before at her friend Emma’s house:
Barukh atah Adonai, Eloheinu, melekh ha’olam…
(Blessed are you, Lord, our God, sovereign of the universe)
asher kidishanu b’mitz’votav v’tzivanu
(Who has sanctified us with His commandments and commanded us)
l’had’lik neir shel Shabbat. Amein
(to light the lights of Shabbat. Amen)
I wished for that kind of home-faith-tradition… but even in a religiously oriented house like ours, the best that we could do was a grace at dinner time and an occasional verse of “Away in the Manger” during tucking-in-time, a tradition started by my mother when I was the one being tucked in.
I love Epiphany.
It is one of the principal feast days of the year but, for a festival that is all about light, it tends to stand in the shadow of its Merry cousin, Christmas.
By the time Epiphany rolls around, most folks have taken their trees down (we often left ours up until the 9th so as to celebrate my stepfather’s birthday on the 8th with holiday decorations still in place) and, even for those hearty folks who keep the party going for the whole 12 Days of Christmas, by Epiphany, there is often a collective sigh and an attitude of “let’s get back to it.”  Back to work. Back to school. Back to the treadmill.
Not I.
I like to imagine the steady shining of the star that brought the Magi, persistently, on their long trek to the house of Mary, Joseph and (by then) the toddler Jesus.  I like to imagine the sustained excitement and curiosity that kept them going on their long journey until, at last, they saw “it”-  The Savior- for themselves and were brought to their knees.
I like to think about Jesus, later in his life, standing knee-deep in the Jordan, submitting to the ritual of his cousin John, accepting the Baptism of Repentance, and the sudden, shining light streaming through the parted clouds …and the Dove… and the Voice.  Scripture Scholar John Dominic Crossan, says that the Early Church found Jesus’ baptism to be an “acute embarrassment” for its homeliness (mud, water, the humility of the Son of God)… but I like to wrest my gaze from the muddy water and look, instead, towards the  sanctifying light breaking through the clouds. It is a moment of manifested glory.
And the third story that we connect to Epiphany is the changing of Water into Wine at the Feast of Cana.  This, Jesus’ “first miracle, ” is a good one, alright,  and as the water blushes into wine, we can see Jesus’ ministry beginning to open up and ripen and make his holiness manifest to all those around him.
Epiphany-  it’s about light.  And, as I see it, it is about light dawning.  About our realization of who Jesus is, dawning, developing, becoming brighter and brighter, as the season wears on and as we become closer and closer to this God-become-Man, Jesus.
So, get out the chalk.
Read some of the prayers-  or none of the prayers-  but mark up the door good.
Tell God that “this house (and all in it) be blessed for this year.”
Bless us enough, God,  to see the light of Christ in all that enter our doors.
Bless us enough, God,  to find Jesus when we pass through the door and enter the big, busy world.
Keep us focused on the light and the message of peace and justice and love that extends to us in its heavenly rays.

#
P.S. There are lots of good house blessing ceremonies and rituals for Epiphany that you can perform in your own home, asking God’s blessing on the place where you dwell.
Here’s a web address for a Chalking of the Doors rite that I like from Bishop Kirk Smith of the Episcopal Diocese of Arizona:http://www.azdiocese.org/dfc/newsdetail_2/3163149 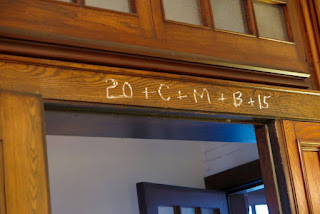